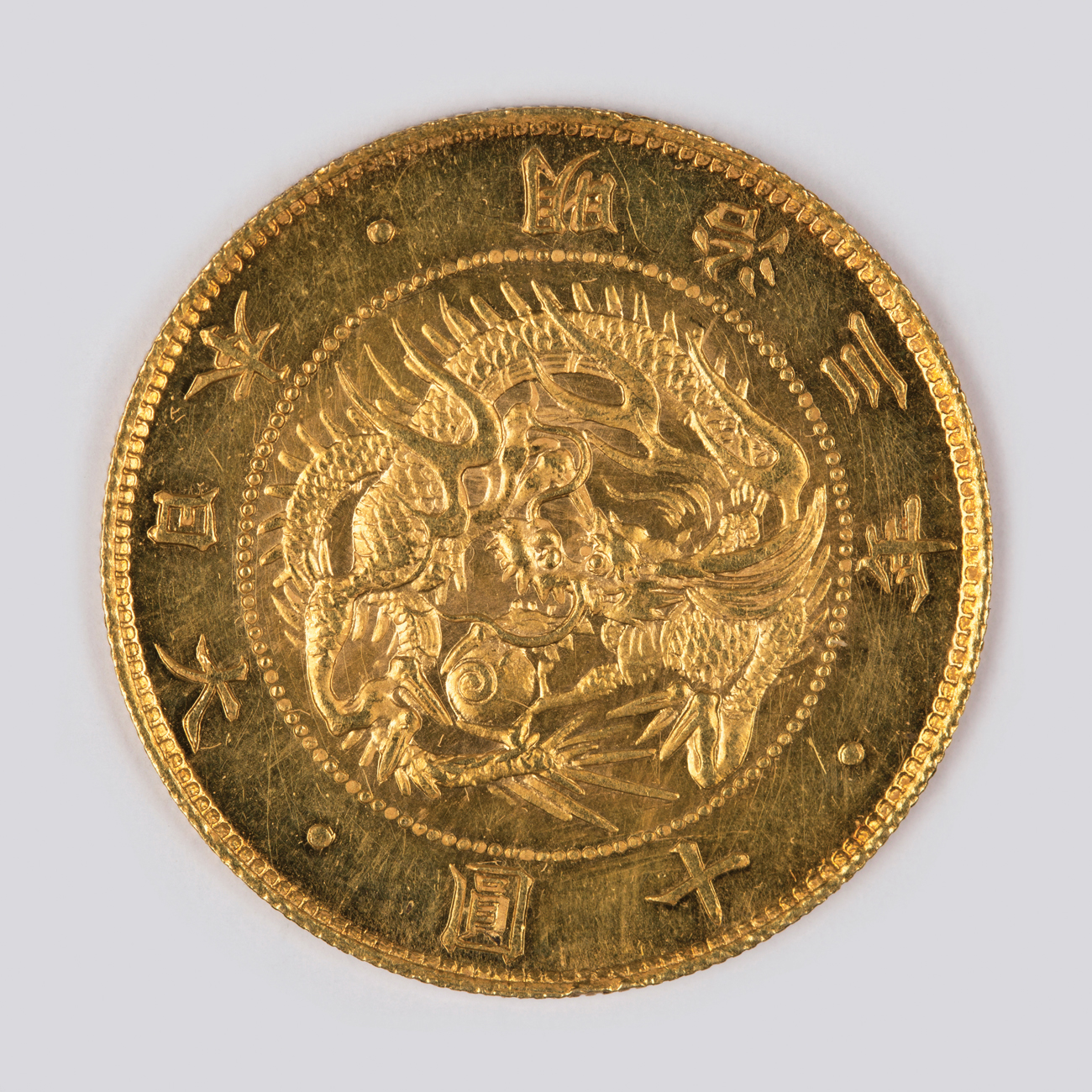 Previous Lot Next Lot
Place a bid
You’ll need to sign in to place a bid or add this to your wishlist
Sign In
Not yet registered? Click here
Share this lot X
http://www.tooveys.com/lots/473375/a-japan-meiji-ten-yen-year-3-pattern-gold-coin-1870
Condition Report X
Wishlist
Enquire
Print
Share
LOT 1801
A Japan Meiji ten yen Year 3 pattern gold coin 1870, large flan, diameter 32mm, the obverse with dragon design within a beaded border surrounded by a frame of characters, the reverse with sunburst flanked by banners between Imperial kiku and kiri mon, weight 15.6g (extremely fine overall, dull mirror-like fields, sharp detailing with overall hairlining).
Provenance: George Henry Williamson Esquire of Worcester (1845-1918) and thence by descent to the vendor.
Note: George Williamson was a former mayor of Worcester, a manufacturer and a Conservative politician. It is thought likely by the vendor, however, that this coin was originally acquired by George's father, William Blizard Williamson (1811-1878), a tinsmith from Cork who eventually settled in Worcester, where he founded the Providence Tinplate Works in 1858. George and his brother William Blizard the younger took over the company after their father's death. George Williamson deposited this coin with several others for some time at Lloyds Bank in Worcester, incorrectly labelling it 'Chinese gold piece', suggesting that he was unaware of its significance. It is currently one of only five known examples; of the four others, one is in the Bank of Japan collection, one is in the British Museum and two were auctioned by Heritage Auctions in USA in 2011 and 2014.
Pre-sale viewing of this lot is by appointment only - please call 01903 891955 (+44 1903 891955) to arrange.
Hammer price: £260,000
( Plus
Buyer’s Premium
Buyer’s Premium is an additional charge on each lot sold, currently this is set at 24.5% plus VAT (29.4% including VAT) of the hammer price.
)
All sold prices shown exclude Buyer’s Premium
Condition Report
There is no condition report for this lot.
Never miss an auction
Sign up now to receive auction alerts for
Coins, Banknotes and Medallions
Sign up now
Get auction alerts and
never miss an auction
© Copyright Toovey’s 2017-2022. All rights reserved.   Rupert Toovey & Co Ltd T/A Toovey’s.   Registered in England and Wales.   Company Registration No 2994075